Duanwu Festival (端午节) or Dragon Boat Festival falls on 5th day of the 5th month of the lunar calendar which was yesterday.

The story behind these; “The Duanwu Festival is believed to have originated in ancient China. A number of theories exist about its origins as a number of folk traditions and explanatory myths are connected to its observance. Today the best known of these relates to the suicide in 278 BCE of Qu Yuan, poet and statesman of the Chu kingdom during the Warring States period.”

On this day; the Chinese will usually celebrate it with the present of rice dumplings. You can easily buy it or make it. I’m not making it because it involves many steps. In order to save the hassle, we just purchase them. 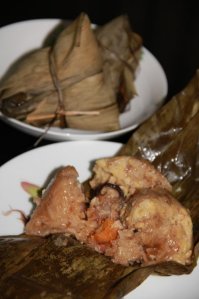 Jianshui zong (碱水粽): Meaning “alkaline water zong”, these are typically eaten as a dessert rather than as a main meal. The glutinous rice is treated with lye water (aqueous sodium carbonate), or potassium carbonate giving them their distinctive yellow color. Jianshui zong typically contain either no filling or are filled with a sweet mixture, such as sweet bean paste.  They are often eaten with sugar or light syrup.

When was the last time you boarded a flight? Do you have any plans to go further? Really miss traveling.
Do u still remember this jelly in cup serve in KFC? So nostalgic. Its something simple but also nice. Those days it was served in a tall slender glass with a full scoop of vanilla ice cream. Now it has became such mini size. 🤭
Nature vs. Human Act.
Shared about my recent experience with the All New Isuzu D-Max X-Terrain on my blog. Read more here... https://melissathegreat.com/2022/04/12/isuzu-d-max-x-terrain-experience/
The Exchange 106 (TRX)
Handmade Soaps by @manjabath