Roti paratha or usually named as roti canai which normally seen at a mamak stall, can now found in supermarkets. Its so convenient.

Last weekend, I saw none other than the normal plain(kosong) roti paratha, but a stuffed roti paratha(at Jusco Supermarket). There were 2 different stuffing sold. The one I decided to purchase is stuffed with ‘tomato and onion’. While the other one is stuffed with ‘mixed vegetables’. Each packed of 4 pieces cost not more than RM4.  Apparently all you need to do is just pan-fry it with a non-stick pan. Best served during tea-time. 🙂 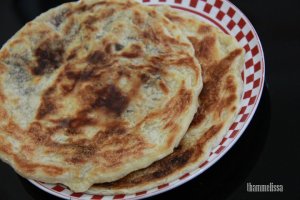 when its ready to serve

Sliced it. Ehhhh??? Macam not similar to the photo shown on pack lah. Tomato sauce too little lah…Anyhow; the roti is nice because not too thick & its crispy! Moreover the taste is good leh. *grinned* 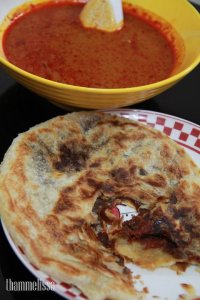 Ohh ya, not forgetting a bowl of yummy curry to dish with it. A must have curry! (curry bought elsewhere)

Back to School Deals at below RM20!!
Santa Jet Wishing Everyone Merry Christmas and Happy New Year! 🎄🎅⛄✨
It's still not late to send out Christmas present.
Butterfly Life Cycle, taken from my mom's garden 😊😊
#throwback Night Cafe is still open when the LO requested for supper 😃😃
My pawprint handmade fabric face mask leng mou? Ngam for paw-friends.