Day 4 seems to look good. We were greeted by sunshine with cooling wind instead of rain. Japan’s streets are really worth photographing. Be it portraits, street photography or landscaping.

To go to Maruyama Zoo.

Purchase admission ticket from counter at a reasonable price of ¥600. Children is free of charge (below age 16).
*get a zoo map from the ticket counter*

The zoo is located within Maruyama Park in western Sapporo, and is the oldest zoo in Hokkaido. Sapporo Maruyama Zoo covers an area of 22.5 ha. 177 kinds of 924 animals are bred in February 28, 2014.

The Maruyama Zoo is one of the most nature-oriented zoos in the nation.

The zoo is very well organized with animals kept in different sections.

3 Borneo Orangutans and 2 White-handed Gibbons are bred at Anthropoid House (類人猿館). As for the borneo orangutan, the name of male are Teijiro (弟路郎) and Hayato (ハヤト), and the name of female is Rainbow (レインボー).

1 Larga Seal and 2 Harbor Seals are bred at Sea Animal House (海獣舎). The name of the Larga Seal is F (エフ), and he is a male. Originally they inhabit the Bering Sea or the Sea of Okhotsk. They live mainly on fishes and are a great eater very much. As for the name of Harbor Seals, a female is Gg (ジージー) and a male is Chiharu (ちはる). They are a mother and a son. The Harbor Seals inhabit the Pacific and the Atlantic coastal place, and a neighborhood of Cape Erimo is the largest habitat in Japan. They live on fishes.

3 Polar Bears are breed at World Bear House (世界の熊館). The name of male is Denari (デナリ). The name of female are Lara (ララ) and Candy (キャンディ). Originally they inhabit the Arctic Ocean coast and are omnivorous animals. They hunt mammals such as seals mainly. As for a big individual, it seems to be length over 3 m and seems to be weigh over 800 kg. It is said that they are the largest carnivorous animal on the earth. However, they are animal species that are in an extinction crisis. The Polar Bear is a representative animal of Maruyama Zoo.

2 Yezo Brown Bears are bred at Yezo Brown Bear House (エゾヒグマ館). The name of male is Dai (大) and the name of female is Towa (とわ). Originally they inhabit Hokkaido and are the largest animal in the natural world of Japan. A big individual seems to be weight over 140 kg.

6 Yezo Deers and 4 Timberwolves are bred at Yezo Deer and Wolf House (エゾシカ・オオカミ舎). As for the Yezo Deer, the name of males are Megumu (恩) and Ayumu (歩), and the name of femals are May (芽), Amanda (アマンダ), Isabel (イザベル) and Michi (道).

The name of the timberwolves are Jay (ジェイ), Leak (リーク), Yuki (ユウキ), Sho (ショウ). They are all male. Originally they inhabit the forest area in the northern North America.

Originally they inhabit a tropical rain forest in the African central part and live in groups.

due to the cold weather, all tropical animals were kept indoor.

About 80 monkeys are bred on Monkey Mountain (サル山). Japanese Macaque inhabit the Japan, but they do not inhabit the Hokkaido. The height is about 60 cm.

Forest of Owl and Hawk

Rain again! *sigh* But it does not dampen our day!

Giant Kangaroo, Slow Loris, Galah, Rosella, Domestic Rabbit are bred at Kangaroo House (カンガルー館). They inhabit around Australia. The Giant Kangaroo seems to be height over 130 cm and can run at 60 km per hour.

The Zoo for Children or we called it as Petting Zoo area was the best part, as everyone can get up close to these animals.

You can also shop for gifts and souvenirs here (Animal Science Pavilion). This place is kinda secluded at one corner.

We found Zoo Cafe inside the above building. We had our quick lunch here. Both of us had spaghetti, it tasted not bad. Price was quite affordable too. I saw some nice pancakes offered here.

Although its an oldest zoo, but it is so well-kept and clean! Hence, I felt its a child-friendly zoo. I’m not sure how people could only spend 1-2 hours here. We covered almost 90% of the zoo, we’ve already spend almost 4 hours here. 😀 😀 I also noticed there are several on-going upgrading works. Besides that, there is also a 7-11 convenient store in this zoo. 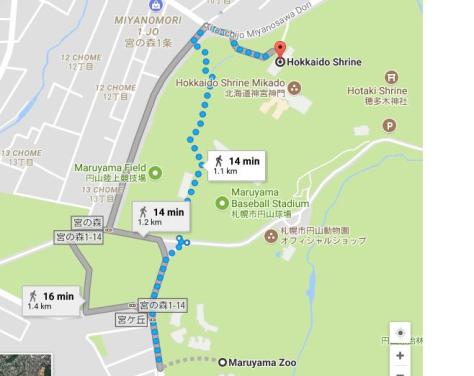 crossing the woods through Maruyama Park.

Coincidentally it was also the Hokkaido Shrine Festival when we were there.

The Hokkaido Shrine Festival, also called the Sapporo Festival, has a history going back over a century. It is also one of the biggest festivals in Hokkaido. The festival runs from the 14th to the 16th of June. Stalls, entertainment and other attractions are set up through the park for those 3 days.

Assorted food and games with winning prize were offered here. Feels like a fun fair. But the prices are quite high for us, Malaysians.

Back to the main part, the Hokkaido Shrine. It is one of the most popular Japanese temple in Hokkaido.

“In 1869, Meiji Emperor issued the imperial rescript to build a new shrine in Hokkaido. Then, this shrine was completed in 1871.
Because, at that time, Japanese government began to develop Hokkaido, and a guardian god was needed.

The Torii gate (main gate) was set up on the northeast side of the shrine.
Because, Russia was advancing to the northeast of Hokkaido through Sakhalin and Kurile Islands.
This shrine was the guardian to defend against Russia.”

Now it is the main shrine in Hokkaido, and many worshippers visit here.

Unfortunately the place was closed for upcoming ceremony. We could only hang around at the entrance.

Apparently it was the 3rd day, final day of the Shrine Festival. We could watch this parade here! It was an eye opener to me. Their costumes are so colorful. (but it started to rain as the parade begins. 😦  )

On June 16, the final day, a line of more than a thousand people in colorful Heian period costumes parades around the city, along with four mikoshi portable shrines and eight floats. The parade starts at Hokkaido Shrine in Maruyama and reaches central Sapporo in the afternoon, passing along major avenues lined with spectators. Traditional dedication ceremonies are held at the shrine.

We then traveled back to Susukino.

Its was already late evening. Just the right time for dinner.

While walking back to our hotel, we decided to settle our dinner here at Matsunoya Susukino.

about 5 minutes walk from Susukino Station.

We got attracted by the Morino Sample: Plastic food ; which was displayed at the front door.

We made a right choice. The food was good! Portion was on par with the price too!
Oh ya, apparently their tonkatsu is nice too. Do give it a try if you are nearby. 🙂